The Classical Station as Community Connector

Posted at 14:27h in Uncategorized by classicalmusic

What is the value, relevance and role of classical music public radio today? A Working Group of seven Classical Music Rising stations recently embarked on a journey of discovery. Please read their report, The Classical Station as Community Connector. It presents important findings of opportunities for our stations to take on larger, more meaningful roles, and to build ongoing, robust relationships for the benefit of the markets we serve. As the group states, “We share a strong sense that sustaining our mission and our organizations requires more than our broadcast service alone, and that there are opportunities for classical stations to be a force for good in our communities.”

This week at the Public Media Development and Marketing Conference in San Francisco, members of the Working Group will discuss what they heard and what they learned from their listening sessions with local civic and cultural leaders. We’ll continue our discussion at Classical Music Rising’s retreat for station partners next month in Maine, and invite more stations to follow the path of engagement the Working Group has developed. There is much work to be done, including collecting and sharing ways in which our stations are already playing roles as community connectors, and articulating a powerful and inspiring vision of the service and value classical stations can provide through a fully developed, multi-platform effort.

Download The Classical Station as Community Connector on www.ClassicalMusicRising.org – and explore the items below on how the arts make our communities better places to live, work and play.

The Arts Mean Business – A New Report
87% of Americans believe arts and culture are important to quality of life. Last month Americans for the Arts released Arts & Economic Prosperity 5, The Economic impact of Nonprofit Arts & Cultural Organizations & Their Audiences. This series continues to be the largest and most comprehensive economic impact research conducted on the arts field. Learn more and download the report.

The Arts Ripple Effect
Likewise, in an inspiring paper called The Arts Ripple Effect, one key organizing idea stands out as having the most potential to shift thinking and conversations in a constructive direction: “A thriving arts sector creates ‘ripple effects’ of benefits throughout our community.” Download the paper and explore examples of framing language on the value of the arts as a public good. Thanks to KMFA’s Amanda Faraone for sharing this with us.

Executive Turntable Spins at Top American Orchestras
Allison Vulgamore’s announcement that she will step down as President and CEO of the Philadelphia Orchestra comes amid several executive shakeups at top U.S. orchestras. During Vulgamore’s eight-year tenure, Philadelphia regained a local broadcast presence through WRTI and, more recently, secured a national deal with SiriusXM. Meanwhile, as Los Angeles Philharmonic President and CEO Deborah Borda decamps for the same job at the New York Philharmonic, she leaves behind media ventures involving Virtual Reality and 360-video, as well as ongoing concert broadcasts on Classical KUSC. The San Francisco Symphony’s Executive Director Brent Assink bows out with an 18-year legacy of media projects, including American Mavericks, Keeping Score, program note podcasts, the Mahler recording cycle, and broadcasts on KDFC. LA Philharmonic and San Francisco Symphony broadcasts are distributed nationally via the WFMT Radio Network.

Seattle’s Classical KING Has a New PD
KING-FM’s General Manager, Jennifer Ridewood, is pleased to announce that Seth Tompkins has been promoted to Program Director following Bryan Lowe’s retirement last month. Ridewood cites the influence of Classical Music Rising’s Workforce report on her selection, with the new ideas stations are trying to attract and develop talent. (The report is posted on ClassicalMusicRising.org.) Ridewood says that Seth has served as an integral member of the station’s programming team since 2011. “He is committed to building upon the success and traditions of KING FM, and brings with him a fresh perspective that is focused on the future.” Learn more about Seth Virginia’s WVTF Expands Classical Programming in Signal Swap
On July 10 Roanoke public radio stations WVTF-FM and Radio IQ will swap frequencies. WVTF, at 89.1 FM since the mid-1970s, will move to 89.5 FM and become WVTF Music. At the same time, news and talk programs on Radio IQ will switch from 89.5 to 89.1. Both stations are operated by Virginia Tech’s WVTF. General Manager Glenn Gleixnertold The Roanoke Times that the changes mean Radio IQ’s news programming will enjoy a wider coverage area, while the amount of classical music will increase on WVTF.
See You next Month in DC at PRPD?
Classical Music Rising is involved in multiple music sessions at the Public Radio Program Directors conference, from August 14–17, and I look forward to seeing many classical station colleagues in Washington, DC. View agenda highlights, and note that the early bird deadline for registrations closes July 14. More info.

NPR and Edison Research Release Smart Audio Report
Smart speakers are only a couple of years old, but they are rapidly becoming essential audio devices for their users. Tom Webster, Edison’s VP of Strategy, unveiled The Smart Audio Report from NPR and Edison Research at the RAIN Podcast Business Summit in New York City on June 21 and via webinar on June 28. The findings reveal that voice-activated devices like Amazon’s Echo/Dot (“Alexa”) and Google Home are encouraging more listening to audio and are considered valued additions to their owners’ lifestyles. Visit National Public Media for highlights of findings and to download The Smart Audio Report.
Apple Introduces New Analytics for Podcasts
Starting this autumn, Apple will offer in-episode analytics for podcasts.  According to Nieman Lab, this means that podcast publishers will finally receive data that tells them just how much of their episodes are actually being listened to — within the Apple Podcast app, at least. Apple’s app “is still largely understood to serve the majority of listening,” notes Nicholas Quah, publisher of Hot Pod Media. Previously, podcast creators were mainly able to get analytics data for complete downloads, a fairly blunt metric that proved insufficient to advertisers. The changes are expected to come with Apple’s iOS11. Wired magazine says, “Apple’s new transparency is huge for podcasts everywhere.” Read more.

VIRAL VIDEO OF THE MONTH

What Happens Just Before Show Time at the Met Opera, in 12 Rooms You’ll Never See

The Metropolitan Opera’s Saturday broadcasts are over for the season, and American Ballet Theater’s dancers are now taking the stage. The New York Times scores big time with this brilliant and witty behind-the-scenes video at the Met.

What classical music videos are you posting that are getting lots of shares? 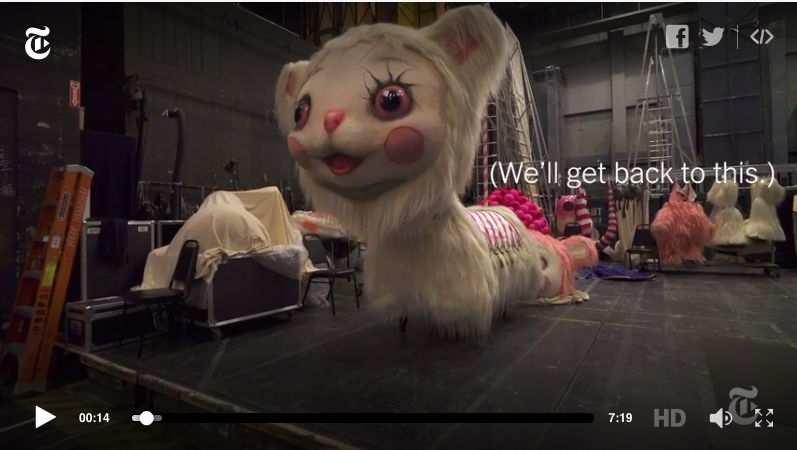 Where do you find classical music trivia and “on this day” items for programming tie-ins? Here are a few of our tidbits for July, contributed by radio producer and writer Brian Wise.

July 7
On the eve of the 1990 FIFA World Cup Final, The Three Tenors gave their first performance at the ancient Baths of Caracalla in Rome, under the baton of Zubin Mehta. According to the Guinness Book of World Records, the recording of the live event – Carreras, Domingo, Pavarotti: The Three Tenors in Concert – became the best-selling classical album of all time, with global sales of 10.5 million copies.

July 7
In 1860 composer Gustav Mahler was born in Kaliste, Bohemia – now the Czech Republic. In 1911, less than two months after Mahler’s death on May 18, another notable composer was born: Gian Carlo Menotti in Cadegliano, Italy.

July 11
In 1922, the Los Angeles Philharmonic played the inaugural concert of the Hollywood Bowl. The program featured Wagner’s Overture to Rienzi, excerpts from Tchaikovsky’s Fifth Symphony and Brahms’ Hungarian Dances, Grieg’s Peer Gynt Suite No. 1, Kreisler’s Liebesleid and Liebesfreud, and Rossini’s Overture to William Tell. The LA Phil’s summer home is one of the world’s largest natural amphitheaters, with a seating capacity of nearly 18,000.

July 14
Swedish film director Ingmar Bergman was born on this date in 1918. Known for such cinematic classics as The Seventh Seal and Wild Strawberries, Bergman also directed what is widely believed to be one of the most successful films of an opera ever made: his 1975 version of Mozart’s The Magic Flute.

July 16
More Three Tenors: In 1994, an estimated 1.3 billion viewers watched a live telecast of the trio performing at Dodger Stadium with the Los Angeles Philharmonic and the chorus of the Los Angeles Opera.

July 16
Violin virtuoso and composer Eugene Ysaÿe was born in Liege, Belgium in 1858.

July 17
In 1717, King George I and a number of nobles traveled up the River Thames in London, serenaded by 50 musicians playing Handel’s Water Music. This marked the first appearance by a French horn in an English orchestra.

July 18
In 1936, the Spanish Civil War began as a revolt by right-wing Spanish military officers in Spanish Morocco. As the conflict spread to mainland Spain, it prompted musicians to go into exile, among them, Manuel de Falla, Joaquin Rodrigo and Pablo Casals.

July 19
The Blossom Music Center, located between Cleveland and Akron in Cuyahoga Falls, Ohio, opened in 1968 with George Szell leading the Cleveland Orchestra. Blossom continues to serve as the ensemble’s summer home, where free lawn passes are offered to young people as part of the “Under 18s Free” program of the Cleveland Orchestra’s Center for Future Audiences.

July 25
On this day in 1992, the Olympic Games opened in Barcelona, Spain with all countries present for the first time in modern history. A highlight of the opening ceremony was Montserrat Caballé’s performance of the anthem “Barcelona,” written by Queen singer Freddie Mercury, who had died of AIDS the previous year.

July 27
It’s Bagpipe Appreciation Day. Tip your local bagpiper, read 10 fun facts about the instrument, discover conferences and festivals, and consider how the instrument was evoked by Bruch in his Scottish Fantasy and Malcolm Arnold in the Four Scottish Dances. Mendelssohn evidently had more ambivalent feelings towards the instrument, despite writing Scottish-themed pieces such as the Hebrides Overture.

Producer – APM’s Performance Today, Saint Paul or NYC
The Producer for Performance Today takes a lead role in initiating ideas, creating features, and recording studio sessions in the production and distribution of the daily, national program. The Producer works as a flexible, creative member of an energetic production team that includes other staff, independent contributors and content partners. Application deadline: July 14. Learn More/apply

Program Hosts – KUSC, Los Angeles & KDFC, San Francisco
The USC Radio Group of KUSC Los Angeles and KDFC San Francisco continue to grow and have openings. There are on-air host openings in LA and SF, and a Chief Development officer position in SF. Together this network of stations reaches 1.3 million listeners per week. Come to beautiful California and celebrate classical music! Learn more/apply

Chief Engineer – WFMT, Chicago
WFMT in Chicago seeks a Chief Engineer to maintain and improve broadcast and production facilities and processes for WFMT, the WFMT Radio Network and related digital initiatives. The Chief Engineer will set long-term strategic plans and will oversee the Operations Manager, Production Assistants and other staff. Learn more/apply

Send your news, tips, job openings, successes, grand failures and big ideas to share through Classical Music Rising. Do you have colleagues to add to this e-news list? Send name, title, station or organization and email address to wende@classicalmusicrising.org

Find classical and news/classical stations across the U.S. on this interactive map – and listen online.

Classical Music Rising aims to shape the future of classical music radio against a backdrop of multiple broadcast and digital platforms, demographic and cultural change, and significant disruption throughout the music industry. The initiative centers on strategy, innovative tactics, and collective action – all informed by ongoing research and analysis. Classical Music Rising is a project of the Station Resource Group and is supported by participating stations and the Andrew W. Mellon Foundation. Visit www.ClassicalMusicRising.org.