Posted at 05:08h in Uncategorized by Wende Persons

A warm welcome to four new Classical Music Rising station partners: Cleveland’s WCLV; Cincinnati Public Radio’s WGUC; WOSU Classical 101 in Columbus; and Boise State Public Radio’s KBSU in Idaho. The support for this project from what is now 27 classical stations across the country is fueling the work to help shape the next generation of classical music public radio.

View the full list of partners on the Project Leadership page of ClassicalMusicRising.org.

Ever wonder about the different programming and automation systems classical stations are using, and the different website solutions? Classical Music Rising station partners recently filled out a brief “Nuts ‘n Bolts” survey to compare notes. View the results of the survey, posted under Resources on the CMR Website. Tip of the hat to WRTI’s Bill Johnson for his query, and we hope you will find the information useful.

Summer is fast approaching… Have you made your conference travel plans? I look forward to seeing many of you at PMDMC in San Francisco, at the Classical Music Rising retreat for station partners in Maine, and at PRPD in Washington, D.C. There will be multiple opportunities at each for classical stations to come together, as the Beatles song goes.

Read on for a special date in your calendar…

Ashley Messenger, NPR’s Senior Associate Counsel and author of A Practical Guide to Media Law, has generously offered to do a webinar for classical stations on music rights. This is a one-time, live-time offering not to miss!

Ashley will provide a general overview of the types of rights, discuss when the incidental use of music (less than 30 seconds) may be fair use, explain the idea of “public performance,” “synchronization,” and “fair use,” describe what is covered when archiving programs online for listening on demand… and more.

To whet your whistle, here’s an illuminating piece from Amplifi Media’s blog. Read “Why Can’t Music Be Played in Podcasts?”

WDAV’s Frank Dominguez in the news
“Mozart, dead 226 years, is trending in Charlotte. So is Bach, gone 267 years. … What’s put WDAV among nation’s top classical stations?” asks the Charlotte Observer. In this recent profile, WDAV GM Frank Dominguez offers a few keys to the station’s ratings successes over the past two years, including the decision to drop top-of-the-hour newscasts for more music. Ken Mills provides additional insights in his SPARK blog: “Perhaps the key to Dominguez’s success is WDAV’s ability to be both an oasis and a community organizer at the same time.” Read the Charlotte Observer interview.

DPTV acquires Detroit’s WRCJ
Detroit Public Television has acquired ownership of WRCJ through a $9 million deal with the Detroit Public Schools. DPTV will operate the station in perpetuity as a classical/jazz station. President and CEO Rich Homberg says DPTV’s expanding relationship with the classical community includes collaborations with the University of Michigan on a Gershwin initiative, Michigan Opera on live streaming, Detroit Jazz Festival, and continued work with the Detroit Symphony and the Sphinx Competition. “The radio station continues to be the hub, driving opportunities for partnership on both radio and television.”

New Mexico’s KHFM goes noncommercial
Longtime commercial classical KHFM in Albuquerque has filed for noncomm status and will soon join the public radio ranks. KHFM’s transition leaves less than a handful of commercial classical stations in U.S.: WFMT in Chicago, WRR in Dallas, and a pair of stations on Cape Cod and in Anchorage. See Google Map of U.S. Classical stations.SRG’s Tom

Thomas on effect of CPB defunding
After the White House issued the President’s budget blueprint proposal to eliminate the Corporation for Public Broadcasting, Station Resource Group co-CEO Tom Thomas joined Adam Ragusea, host of Current’s podcast The Pub, to discuss how the end of CPB funding would affect stations of all sizes. Listen to the episode or read the edited interview in Current.

New at San Francisco Opera: Drinks in the Auditorium
San Francisco Opera has revised its food and beverages policy. According to its website, patrons may now carry drinks in the hall. The company calls this a six-month “experiment,” and adds that “drinks must be [an] approved compostable cup with lid, available at all bars in the War Memorial Opera House.” On the blog Slipped Disc, some commenters registered their disapproval, with one calling it “a disrespectful, totally uncultured act.” Others noted that “sippy cups” have long been in place in other theaters around the world. What do listeners think? Should drinks be allowed in the opera house?

Viral Video of the Month
Star pianist Yuja Wang shows her playful side in this commercial that has been making the rounds online. It’s a tease for the launch of MusicTraveler.com, a website for musicians looking for places to practice. What classical music videos are you posting that are getting lots of shares? 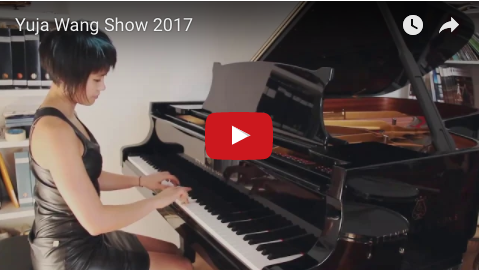 Where do you find classical music trivia and “on this day” items for programming tie-ins? Here are a few of our tidbits for June.

June 8
Robert Schumann is born in Zwickau, Germany on this date in 1810.

June 8
In 1937, Carl Orff’s Carmina Burana has its well-received premiere by the Frankfurt Opera under conductor Bertil Wetzelsberger. Shortly afterwards, Orff said to his publisher, Schott Music: “Everything I have written to date, and which you have, unfortunately, printed, can be destroyed. With Carmina Burana, my collected works begin.” Its uses as radio theme music have been extensive.

June 9
In 1902 Mahler’s Third Symphony — widely believed to be the longest symphony in the standard repertoire — receives its premiere in Krefeld, Germany, led by the composer.

June 10
Steven Spielberg’s E.T.: The Extra-Terrestrial is released in 1982. John Williams’s score goes on to win an Academy Award, a Golden Globe, three Grammys and a BAFTA.

June 14
In 1922, President Warren G. Harding becomes the first president to have his voice transmitted by radio. The broadcast was made as Harding addressed a crowd at the dedication of a memorial site for the composer of the “Star Spangled Banner,” Francis Scott Key.

June 22
In 1950, at the height of the Red Scare, a pamphlet entitled “Red Channels” is published, naming 151 entertainment industry professionals as suspected Communist sympathizers. It includes Leonard Bernstein, Aaron Copland, Lena Horne, and other musicians.

June 25
In 1910, The Firebird, the first of Stravinsky’s ballets for Sergei Diaghilev, gets its first performance at the Paris Opéra.

June 29
Leroy Anderson is born on this date in 1908 in Cambridge, MA. His 1950 piece “The Typewriter” has been frequently used as a theme on radio, often for news broadcasts.

Classical Announcer – WRR, Dallas
Classical 101.1 WRR will have a rare opening for a full-time announcer this summer. The commercial classical station, owned by the city of Dallas, reportedly is Texas’ first radio station, and America’s second radio station. Interested, experienced announcers can email their materials to PD Mike Oakes: moakes@wrr101.com

Program Host – KUSC, Los Angeles & more…
The USC Radio Group of KUSC Los Angeles and KDFC San Francisco continue to grow and have openings. There is an on air host opening in LA, a Chief Development officer position in SF, and coming soon, an on air host opening in SF. Together this network of stations reaches 1.3 million listeners per week. Come to beautiful California and celebrate classical music! Learn more/apply

Chief Engineer – WFMT, Chicago
WFMT in Chicago seeks a Chief Engineer to maintain and improve broadcast and production facilities and processes for WFMT, the WFMT Radio Network and related digital initiatives. The Chief Engineer will set long-term strategic plans and will oversee the Operations Manager, Production Assistants and other staff. Learn more/apply

Finally, KMFA in Austin shares the news that Nathan Langfitt and Carla McElhaney have joined the station as on-air hosts of Sunday Matinee and Night Music, respectively – welcoming two new voices to its airwaves.

Send your news, tips, job openings, successes, grand failures and big ideas to share through Classical Music Rising. Do you have colleagues to add to this e-news list? Send name, title, station or organization and email address to wende@classicalmusicrising.org.

Find classical and news/classical stations across the U.S. on this interactive map – and listen online.